Situated in the lap of the mother nature, Agartala in Tripura is a place of lush greenery. The river Haora flows through the city. Agartala shares its boundaries with the state of Assam and Mizoram and the country of Bangladesh. Agartala is situated only 2 kms from Bangladesh.

Located in the West Tripura district, the Agartala city has an altitude of 12.80 metres and area of 76.504 km2.  Agartala is situated along 23° 45’- 23° 55’ N latitude and 91°15’- 91°20’ E longitude, in the flood plains of the Howrah River. Agartala shares its borders with the Indian states of Assam and Mizoram and international boundary with the country of Bangladesh.

Climate and Weather of Agartala 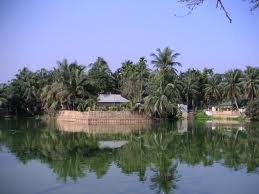 The Agartala city experiences a monsoon influenced humid subtropical climate. Summer in the beautiful city starts from April and lasts till October and summer is accompanied by heat and humidity. The average temperature during summer is around 28 °C. Winter in the city is short and mild which starts from mid-November and lasts till early March. The winter months are  mostly dry and the average temperature is around 18 °C. The monsoon season starts from June and lasts till September and is accompanied by heavy rain and the average annual rainfall is around 220 cm. Flood is also common during this time of the year. The river Haora remains flooded with water during the time of monsoon. Winds are of moderate velocity and are from the south-to-south – east direction for most of the time. The average velocity of wind varies from 4 km to 9 km per hour. The best time to visit Agartala is from September to February.

Agartala is situated on the banks of the Haora river.The Haora river is the lifeline of the Agartala city as the river is the main source of drinking water for the people of Agartala and its surrounding areas from Champaknagar to Bangladesh border. One of the major rivers of Tripura, the Haora which originates from the eastern side of the Baramura range passes by the southern embankment of Agartala finally flowng down into Bangladesh. The flow length of the river is 53kms in Indian territory and basin area is 570 sqkms. The annual flow of Haora is 36,032 m3. Agartala city is also endowed with natural and mineral resources in the form of bamboo, cane, rubber, natural gas, clay and glass sand.

Quick facts on Geography of Agartala