The only lake palace in Northeast India, Neer Mahal or the palace of water is a wonderful water palace situated near Agartala city. A former royal palace, Neer Mahal has been built at the centre of Rudrasagar lake having an area of 5.35 sq km. King Bir Bikram Kishore Manikya built the Neer Mahal which today stands as a most famous architectural wonders and a prominent tourism attraction of Tripura. 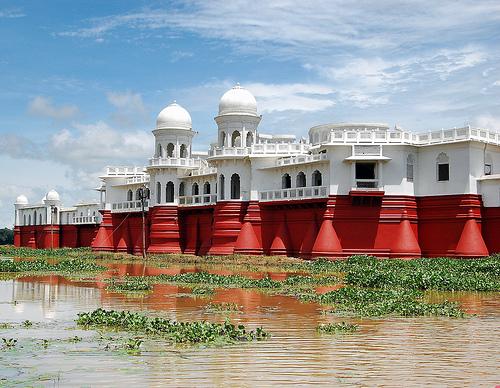 The amazingly beautiful and wonderful Neermahal imbibes  Hindu and Mughal architectural style which is clearly noticeable on the domes of the palace. The palace was designed and constructed by Martin &Burn Co. Sandstone and marble has been used for the construction of the beautiful palace.

As there was a motor boat ghat in the palace, the royals could enter the palace by motor boats. There were two stairs at the ghat- one for the “maharaja” and the other for the “maharani”. With towers and pavilions, moats and bridges the palace is a wonder to look at. The surroundings of the palace are lush green and beautified by colorful flowers. Birds could be spotted over the lake over which the palace has been built. The palace would be lit by flood lighting in the evening. Water sports facilities have also been arranged. With all these amazing features the Neermahal has become a real wonder.