A former royal palace, the Ujjayanta Palace situated at the beautiful city Agartala is one of the primary tourist attractions of the city and Tripura as a whole. A superbly constructed building the Ujjayanta palace is an artistic museum standing on the banks of a small lake surrounded by lush greenery. Reportedly the largest museum in Northeast India, the name of the palace Ujjayanta was given by great poet Rabindranath Tagore. 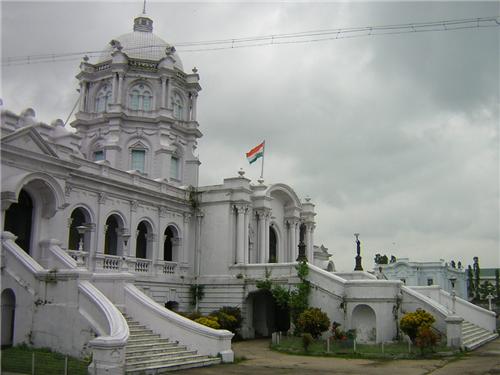 Construction and Architecture of Ujjayanta Palace

The Ujjayanta Palace was built between 1899 and 1901 by the then king, Maharaja Radha Kishore Manikya . The palace saw many ups and downs during its lifetime and due to a devastating earthquake in 1897 parts of the palace were destroyed also. However, the palace was later reconstructed at the heart of the Agartala city. The Tripura government purchased the palace from the royal family in 1972-73. The palace housed the State Legislative Assembly till July 2011. The palace presently stands as a very beautiful eye catching building.

The Ujjayanta Palace is a two-storied building covering an area of one km per sq. The main block of the building covers 3.2 km per sq which comprises public halls such as Throne room, library, Durbar hall and reception hall.  The neoclassical palace was designed by Sir Alexander martin of Messrs Martin & Co.

The Chinese room of the Ujjayanta palace is worth mentioning. It is a beautiful room where the ceiling was crafted by artisans brought from China. There are three large domes here. The central dome is 86’ high. The magnificent tiled floor, the curved wooden ceiling and the splendidly crafted doors are the main attractions of the palace.

Inside the museum one can view the the lifestyle,tradition, arts and culture, crafts and customs and practices of several northeast communities. 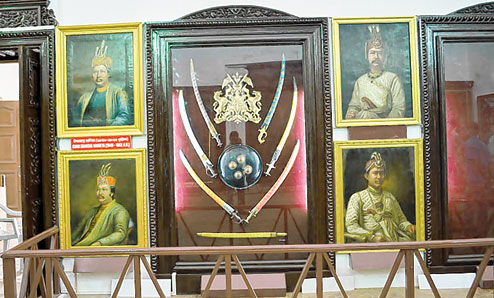 The beauty of the Ujjayanta building is further enhanced by the musical fountains in front of the main entrance. The flood lighting augments the beauty of the palace further. The evergreen and colourful gardens here are decorated in the Mughal style with fountains in the gardens. On either side of the garden are two splendid ponds decorated with pools and fountains and by the side of the palace numbers of temples are located.

The best time to travel the palace is from October to March. Tours are also conducted by the Tripura Tourism Department.

Situated 1 km north of the Ujjayanta Palace in Agartala, Kunjaban palace is an enormous building set up on a green hillock having exquisite scenic beauty. Kunjaban means a bower. Therefore, the well laid gardens and lawns here make it an extremely beautiful place. Kunjaban palace has impressive memories of great poet Rabindranath Tagore staying here and composing some of his finest songs here during the maestro’s beautiful retreat. 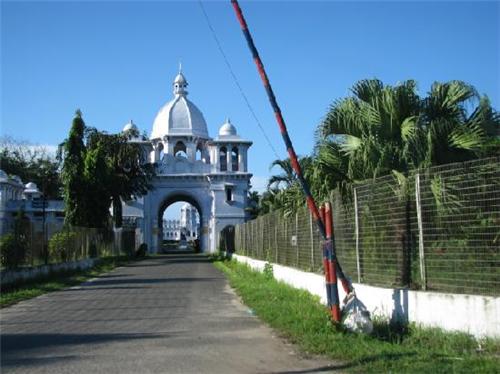 The splendid and green Kunjaban palace serves as the official residence of the Governor of Tripura. After the dissolution of the monarch state into a republic country, the palace was handed to the government. Maharaja Birendra Kishore Manikya (1909-1923) selected Kunjaban for building a suburban palace for retreat and constructed a palace in 1917 which was called “Pushbanta Palace”. The palace and its adjoining garden plan was drawn by the maharaja himself. The insight of the maharaja and the beautiful building made thereafter is still clearly visible in the magnificent carvings and innovative creations. The beautiful landscape of Kunjaban is surrounded by lush green grass, green garden and a zoo. The palace is all the more special to the state as the great Poet Rabindranath Tagore made the eastern apartment of the palace his home during his seventh and last visit to Tripura in 1926 and also he composed many of his famous songs during his retreat here. The southern side of the palace is a huge park namely "Rabindra Kanan" which is open for the public throughout the year.